I find it really difficult to explain if awareness means making Autism the exception – which would include special learning methods, special units, training, etc; or if it means accepting that Autism is exceptional – and whether exceptional means rare/uncommon, or inspirational/remarkable.

Making Autism the exception would include all the initiatives I have seen come into place these last few years. For example, Microsoft, Apple, BBC, Light it Up Blue, #EmployAutism, First Repondent training, police training, teacher training and the Israeli army which uses autistic volunteers to interpret complex satellite images. These organisations have put in place procedures, other than their usual, to accommodate individuals on the spectrum. Their training is tweaked to provide for sensory overload/deprivation, social abilities and employability. Is this the answer? Will awareness make Autism the exception? And if it does, will that force our global community to become more inclusive?

Will being the exception finally give Autism it’s place in our society?

It feels like a really roundabout and oxymoron-ish (yes, i made that up) way to make equality and inclusivity a reality.

So, a couple of new initiatives that have taken place this week – which make Autism the exception are:

Accepting that Autism is exceptional needs further definition. If we view exceptional as meaning uncommon, rare, weird then we fall under the exception bracket of awareness. Accepting Autism as being remarkable/inspiring is the meaning I am going for here.

This sort of awareness requires a very broad kind of thinking, it needs you to bulldoze all your established conceptions of Autism. This kind of awareness comes from inspirational people committing inspirational acts in the name of Autism. The kind of acts that touch your heart instead of your brain. The ones that speak to your soul, your humanity, and draw your body to get out there and help, not the ones that make you brainstorm in order to develop plans and initiatives. The irrational rather than the rational, if you like.

Making Autism exceptional is only achievable through the telling of personal experiences. Only through the eyes and words of people who have been inspired by Autism can inspiration be spread.

There are so many inspirational stories I could share with you that make Autism exceptional. The point of this week though is that we can make Autism a topic by making it an exception and by making it exceptional, it’s not a question of either/or – because Autism is both an exception and exceptional. I think the worst outcome would be if we made it either/or. Autism doesn’t need your pity or fear; it needs you to learn and adapt. It wants you to be inspired.

Autism doesn’t need an attitude of exceptions – it needs acceptance of the exceptional.

The struggle for awareness has reached a critical point. The point where we now know we can make a difference and have come a long way but, still have light years to get to where we want to be.

Week 9 begun with France and Switzerland receiving their cards and starting to distribute this week. Christos’ 18th birthday is ONLY 2 weeks away today.

FAB 1: After my fab auntie Eleni gave me the idea, I have spent most of my wage on Disney dresses and masks for his big day. The princesses will include Belle, Snow White, Elsa and Cinderella, Christos will be Woody the Sheriff and the guests can pick and choose from a range of masks – including Mickey, Donald, dwarfs and Princesses. I am hoping that surprising him with his favourite characters will be well received and that he won’t just want us to wear normal clothes. He does this thing when he gets too excited where he hides things for months until he’s ready for it – I’ve mentioned our DVD fights before. We are also expecting lots of birthday cards from Switzerland from people who found #Project324 and wanted to send him an actual card instead of an email – how amazing??

FAB 2: On April 2nd 2015 16,000+ buildings joined Light it Up Blue and raised awareness. This year, on April 2nd, 157 countries lit it up Blue for Autism Awareness. What’s amazing about 2016 LIUB is that it was not limited to landmarks, local businesses, houses, hotels signed up for it and lit it up blue for Autism. That is awareness in practice. Organisations, campaigns, fundraising, and the tireless community that dedicates every moment to raising awareness made the topic so visible that local businesses pledged their buildings for Autism Awareness. You can see the breathtaking pictures here.

FAB 3: Another great thing that has been happening  was the first  AsIAm conference, which took place in Dublin on the 16th April. AsIAm wanted a conference where it could bring people together and promote the idea that every single person with Autism must have the opportunity to meet his/her personal potential.

FAB 4: In Tampa Bay, Florida, small businesses have announced that they will be partnering with the University of South Florida to become more autism-friendly. This will include customer services, AND an internship programme. “All of the students internships are in careers they think they might be interested in when they leave” said Susan Richmond, head of The Learning Academy at the University of South Florida. The Academy provides a custom transition program to prepare adults on the spectrum for employment. Kaleisa Tea Lounge on Fletcher Avenue in Tampa was one of the first to enter the programme. Owner Kim Pham is proud to talk about her new intern: “He is great. Really hard working, really funny, and he fits in really well with everyone on staff. You can’t even tell he’s an intern. Right away he rolls with the punches. When we get really busy he runs around hectic, and really pitches in, working so hard, we appreciate that”. Didn’t use the word Autism, difficult, didn’t have lower expectations – he’s just another intern.

FAB 5: After his birthday, I will be joining Ambitious About Autism and writing for the UN’s 2016 Theme: Families, healthy lives and sustainable future. This is the International Day of Families which is celebrated on the 15th of May every year. The Day was proclaimed by the UN General Assembly in 1993 with resolution A/RES/47/237 and reflects the importance the international community attaches to families. The International Day of Families inspires organisation to promote a series of awareness-raising events, including national family days, workshops and conferences, radio and television programmes, newspaper articles and cultural programmes. So find out whats happening in your area and join in. This isn’t just about Autism, it’s about families.

Cyprus sipped on wine to celebrate their final card:

Ukraine was chillin’ with some coffee: 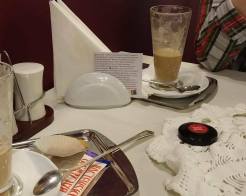 Dubai was a bit famished after trekking in 40 degrees leaving cards everywhere:

and Belgium got creative: 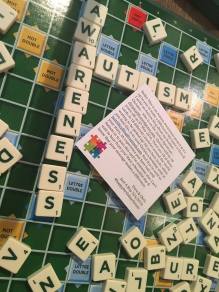 Before the pictures though, as this month is known as Autism Awareness & as this project is about Awareness, I thought it would be appropriate to highlight what we want people to be aware of.

And one mid-air travelling from Australia to the UK 🙂

Week 1: I sent out the rest of the cards to Greece, Switzerland, Sri Lanka, Turkey, Iraq and Ukraine. Some have already been distributed! I hope you’re looking out for them wherever you are.

The end of week one made me think of the first autism diagnosis – so I did a bit of digging.

Donald Grey Triplett was born September 1933 in Forest, Mississippi and has the title of being the first person to be diagnosed with Autism. Today, he is 82 years old still living in the small town where the first recorded story of Autism began.

Donald was “Case 1” among 11 children who were studied by Baltimore psychiatrist Leo Kanner. In his scholarly paper, which you can read here (http://simonsfoundation.s3.amazonaws.com/share/071207-leo-kanner-autistic-affective-contact.pdf) he explains how he was witnessing ‘fascinating peculiarities‘ in his patients and that there was no research on in any medical textbooks. He dubbed it “infantile autism“, which was later shortened to just autism.

John Donvan and Caren Zucker are the authors of In A Different Key: The Story of Autism in which they get to know Donald and follow his extraordinary life. Donald was the child of Beamon and Mary Triplett, a lawyer and a school teacher. His behaviour in early years is described as ‘profoundly withdrawn‘, ‘tuned into a separate world with its own logic‘, and ‘its own way of using the English language‘.

Donald seemed uninterested in what his peers were keen on according to Dr Kanner’s article. He didn’t care for things like play dates, or a fully-costumed Santa Claus. However, at 2-and-a-half years old at Christmas time, his father reported that he sang carols his mother sung to him only once and he could re-create an the order in which his father had randomly laced beads on to a string once. Dr Kanner reported that Donald learned the whole alphabet “backward as well as forward” and counted to 100 by the age of 3. He had tantrums and a temper, in fear of being spanked or switched but “he could not associate his behaviour with his punishment“. Words he used were specifically literal and had an inflexible meaning. However, Dr Kanner describes how Donald ‘christened’ his water colour bottles by the names of the Dionne quintuplets (the first quintuplets known to have survived their infancy). Annette for blue, Cecile for red etc and then he explained that Annette and Cecile make purple.

In mid-1937, Beamon and Mary were ordered by a doctor to send 3 year old Donald to an institution. They visited him monthly. In late 1938, after one of their visits they did what they wanted to do all along; they took Donald home with them.

This is where Dr Kanner first appeared in Donald’s life. Dr Kanner mentioned how unsure he was about which psychiatric “box” Donald fitted into, and had to investigate and compare extensively before publishing his ground-breaking paper establishing autism as a new diagnosis in 1945.

That’s it – that’s how this decade-long struggle begun. With dedicated parents, a community that embraced something unique and a doctor who looked deeper.

Today, Donald lives in the same house he grew up in, in a community where everyone knows him, with friends, a Cadillac and his favourite hobby – golf. Donald has travelled around the US and abroad, on his own, and has the albums to prove it.

Credit goes out to his parents, who worked tirelessly to help him connect with the world around him, to give him a language he could communicate with, to help him learn to take care of himself. The recorded efforts of this family are a cornerstone of the autism community we have today, and they are role models to the families of Autism. Credit also goes out to the people of Forest, Mississippi, Donald’s community which made a the humane, probably unconscious, decision to accept him and treat him as “one of their own“; to protect him.

Donald was an important part of this community; he has his school yearbook notes from classmates and friends; he got cheered for his part in a school play. John Donvan and Caren Zucker hope to incorporate the support of the community of Forest, in their movie of Donald’s life.

#Project324 cards are out in the wild. I love how creative these team players are being; leaving cards in menus, guide books, the back pocket of jeans and, of course, in front of an Adele CD. 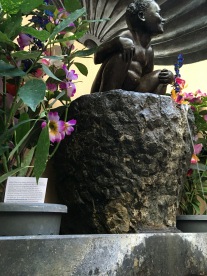 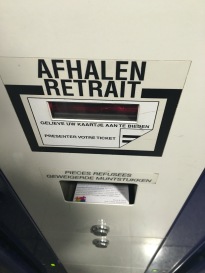 Cards in the UK 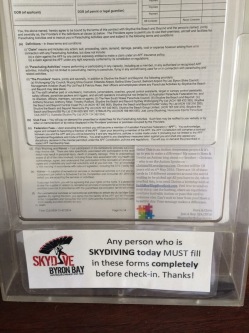