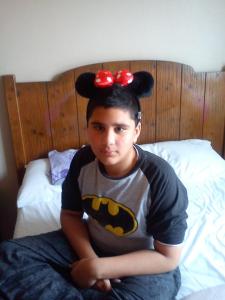 Since he was little he’s always loved Disney cartoons. I don’t think I’ve ever seen him watch a movie; except for George of the Jungle and Friends because I loved them and watched them relentlessly.

In 2013 we took him to Disneyland Paris. His face was ridiculous.

The word ‘Disneyland’ means nothing to him, although he knows the word ‘Disney’ he wouldn’t put the pieces together. How do you explain it? Without relying on the word ‘land’ and that all the characters will be there? So, the way we did it was that Mamma, Theodora and Christos were getting on a plane and going to see Mickey, Minnie, Goofy, Donald, Daisy and Pluto. Over and over again, we repeated those words until he merged them all into one and created his own Disneyland which is called “Mickeyminniegoofydonaldydaisypluto”; I’ve been there, it’s supercalifragilisticexpialidocious.

I thought it would have been more difficult than it actually was; I was worried he’d get scared, he wouldn’t go on any rides, we would lose him. And if we did lose him – then what? Who’s going to find him? If he yells, will we hear? Who will he tell who he is? How would they know to get in touch with us? He barely wore his jacket and never holds any bags, so it’s not like we can write him a ‘lost & found’ note – he’d hate seeing his name on his things. How do you explain it? By the end of the holiday, he only ran away once and the panic was short. The staff at the parks and the hotels were very good – well trained, very accommodating, just what you want to see at such a resort. He went on some of the rides and, even though he was reluctant at first, he loved it and wanted to go again. I think his favourite one was It’s a Wonderful World; he loves the water, and the different stimuli in the ride were really pleasing to him.

He kept pointing at things and saying “Wow”.

We ran after all the characters and even took pictures with some – some he was scared of, like Chip and Dale. The first day, he went straight for the castle. I tried to tell him that at 5pm there would be a parade, and all his favourite characters would prance and dance around. How do you explain that? Mum and I had to stand our ground, we knew he would love it and didn’t want him to miss it. Also, we needed a good place to see everything. So, we gave him a time-limit – stand here until 5pm.

Then the parade was late – it was chaos. 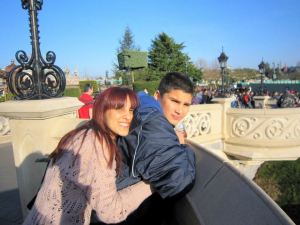 Finally, after a couple of minutes, it started – and he was mesmerised. Then, of course, he thought it was only one carriage so he wanted to follow it, which meant he would miss all the other characters. How do you explain that? We had to yell and run after him, until there were so many people he physically couldn’t move – we couldn’t even hear him over all the music. Then, just like the movies, the crowd cleared, a light shone on him and angels sang – he was pointing at the parade, having spotted the rest of the carriages, and was gesturing for us to go watch it with him. He smiled, he jumped, he sang, he  cuddled us and kissed us the entire time. We went to that parade every day.

Taking him to Mickeyminniegoofydonaldydaisypluto really showed me how much he has grown, how much easier it is to be with him in crowded places, outside our comfort zone. We are going again in April and we can’t wait for that parade – he is my happiest place on earth.

One thought on “The Happiest Place on Earth”