Why fit in when you were born to stand out?

*In 2014, it was found that up to one in 50 children globally are on the spectrum and this is continuously growing number every year.* 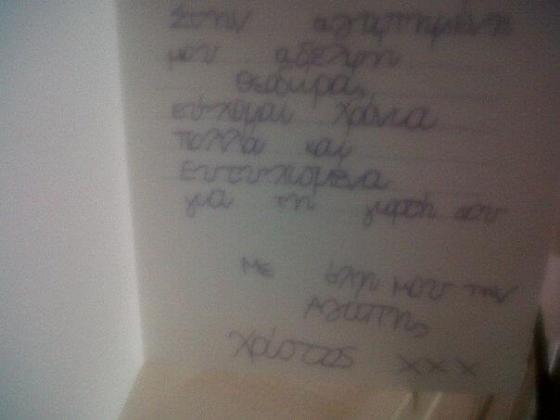 Another big tell for Autism is being verbal. Globally, it is estimated that about 25% of people diagnosed with a spectrum disorder could be considered to have non verbal autism but can learn words. The cautious wording of this is because 1) many children/adults are not diagnosed, 2) no two people on the spectrum present the same. Children may be non verbal for all their childhood and start talking at 15, they could learn single words at 8, they could speak but not in a coherent way. Everything is a ‘maybe’, everything comes with a ‘but’. Nevertheless, about 40% of people on the spectrum will not be able to speak at all.

Christos started saying sounding out the alphabet in speech therapy, and then he finally said ‘One, Two, Three’ when he was 8. I made him say it all the time. When we practised other words he would have to look at our mouth and then copy it. He did quite well at the beginning, until he turned his “R” into a “Y” and his “L” into an “N”. He learned to read and write quite quickly after that. I remember coming home from school and having to babysit until mum came home, and we had to do his exercises or his homework for the day. He hated doing them with me, I think I might have erased his work one too many times and asked him to start over.

Now, Christos can understand most words. He knows the names of objects and when he doesn’t we only have to tell him once. He knows how to explain is he is sad, happy, in pain, where it hurts and why; usually with a few words, not a sentence despite the fact that he knows how to form sentences. He knows right from wrong, he understands fair and unfair although he wouldn’t be able to explain them. He doesn’t have a firm grasp over ideas like liberty, freedom of speech, human rights, war, peace, bills; but who does? He knows you need money to buy things, he knows that people have jobs, he knows that children go to school, he knows that I am abroad. But, he doesn’t know how expensive or cheap things are, he doesn’t comprehend what jobs are for. He knows what England is simply because I am here, he knows Cyprus, Sri Lanka because he has been there. He knows that you need an airplane to travel, but I don’t think he understands what a country is, unless you tell him you need a plane to get there. He knows all the Disney films but calls them different names; he may do this because the names in Greek are usually longer and he can’t be bothered, or he may do this because he prefers the detail rather than a general title. So, he calls Lion King, which in Greek is 4 words, just Lion.

Or I may be completely wrong and he may be able to understand all of these, because in Disneyland he said the word ‘mermaid’ in Greek which we don’t think we have ever used; The Little Mermaid was one of the few DVDs we didn’t have. He comes out with random things and words sometimes, you never know where you stand with Autism. Every day is unexpected, despite the rigid or flexible routine.

We have Sign Language, we have PECS, we have so many ways to communicate that don’t involve words. So, why do our kids have to struggle to learn a language, or be shamed and stigmatised if they can’t? Especially when the rest of the world is capable enough to point to a picture or to learn Sign Language? Why do our kids have to be restricted in their options to be employed, or socialise because they can’t speak words, or cant speak in a manner acceptable to the general public? Why does society expect our children to do all the work and offers little in return?

Because, we live in a world where words mean more than actions. Words can make war and peace, yet a gesture of peace means
nothing. Because, our society values the spoken word more than the written word, that’s why we spend hours watching Netflix but don’t spend a day reading a book. Because, the business man is money-driven and always looking to save time instead of being compassionate and inclusive. Because, if it wasn’t illegal to discriminate against disability our kids would never become part of society.

I don’t need words to communicate with my brother, we get by with 2-3 words a day. Yet, when he gets a

word wrong I correct him, when he got his exercises wrong I’d ask him to do it again and again. Yes, because I wanted him to be able to communicate with others not realising that others should be learning about him too; or even making more of an effort to understand and communicate with him.  A number of kids, the 75% of people on the spectrum who CAN communicate without or some difficulty, have a good vocabulary. Just because they pronounce a word wrong, choose a non-standard way to describe something or take phrases too literally doesn’t mean that our global community has to give up on them after the first try. Ask again. The second time Christos will try to make the word comprehensible; the third time he’ll try even harder.

What if, instead of dismissing them you engaged them?

What if, instead of forcing them to do all the fitting in you met them half way?

What if, you learned about Autism and not stereotyped it?