On 4th January 2016 I relocated to Brussels on a 3 month secondment. In those 3 months I made lifelong friends, we had lols for days, hangovers, a detox diet, so much pizza, I gained 10 kilos, launched an autism awareness project, took LPC exams and witnessed a terrorist attack.

I fell in love with Brussels because it’s such a weird place. You can find anything you want but it is organised chaos. You only have to walk around for 20 minutes and you are bound to go through european, residential, touristy, historic parts of the city. It’s a small town playing dress up as a big city.

On 22nd March 2016 I went to work super early because there was a lot going on. It wasn’t until 9am that I sat down, switched on my PC and looked at my phone which kept getting messaged and missed calls that a colleague said to me – there’s been an explosion at the airport. We knew a group of people from our institution that were travelling that day so we immediately began trying to contact them. It wasn’t until the second explosion hit the news that I stopped and thought that this was something I should worry about. We had colleagues stuck on trains and being diverted, colleagues trying to come back and others trying to leave because they had to get to their children. Our building was in lock down and we had to do inventory to figure out if we would be okay to stay the night. When we were finally allowed to leave, we walked through the city to our neighbourhood, it was such a sunny day. Three days of mourning followed.

I wasn’t scared that day. I couldn’t be scared because we were burdened with so much responsibility. In the weeks that followed, we retold the day’s events so many times and I always remember not being scared. I credit this to that one colleague who was my rock that day, and who stayed late with me when I offered to walk people home. I was scared that afternoon when I had to go buy enough supplies to get me through the next few days. I was scared when I locked the door to my flat and I was alone. For the next few

days, every time I heard a police siren I checked the news. Two days after the attack a friend called to say there’s a march and we should go.

The Bourse was overflowing with people, flowers, candles, song, laughter and life.

I love Brussels because it was were I started my autism awareness project for Christos’ 18 birthday (#Project324). It was from there that I asked the team if they wanted to be part of the project, it was there that the cards were printed, cut and mailed to 18 countries. I am so proud that my brother’s 18th birthday project is associated with the city of Brussels.

In a short 3 months, I loved, I lived, I drank, I ate, I campaigned, I advocated, I worked, I helped, I was scared, I was angry, I lolled, I studied, I cried, I learned, I got a pink elephant hat. Most importantly, I was inspired. On this day, two years ago 32 people died, hundreds were injured and millions were inspired. Millions around the world were inspired by the fearlessness of humans. 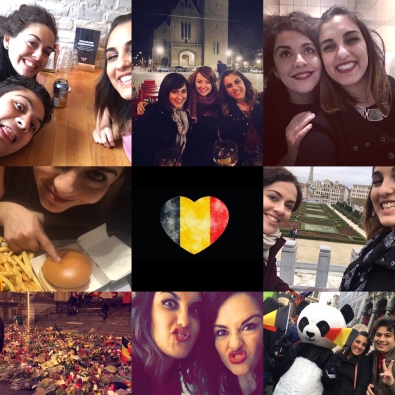